Folks, this just is not so hard. Just read the transcript.

It contains an explicit quid pro quo for felony bribery.

Zelensky: “We are ready to continue to cooperate… buy more Javelins” ⁦

Trump⁩: “I would like you to do us a favor though.” 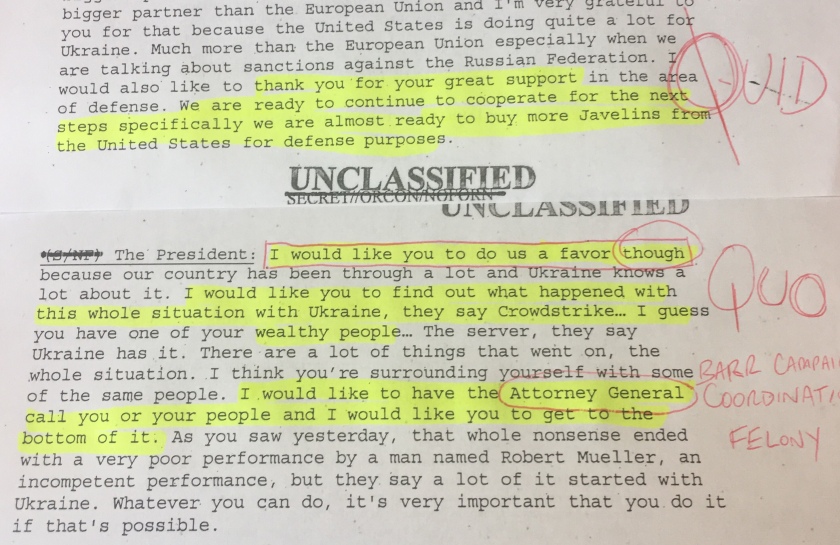 A: I would like to you to do me a favor.

Trump: “The other thing, there’s a lot of talk about Biden’s son, that Biden stopped the prosecution…” 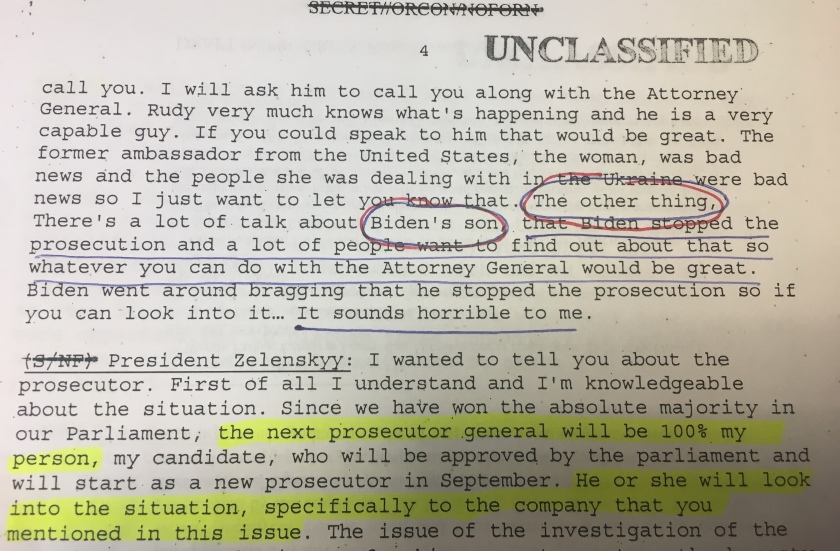 I have been critical of those who claimed that the Trump Tower meeting in June 2016 was a criminal campaign violation, because it cannot be criminal to talk to foreign nationals about candidates. The Clinton campaign indirectly investigating by having FusionGPS/Christopher Steele talk to foreing nationals cannot be criminal. But there is a world of difference between those conversations vs. pressuring a foreign government’s prosecution force to do your opposition research for you and potentially indict the family of your opponent (especially in context of withholding $391 million in aid).

The harder question here is that of course some quid pro quo exchanges with foreign governments are lawful and valid: Ukraine should pay for the Javelin missiles, and of course Trump could say, “You need to pay for the missiles, though.” If a president thought a terrorist or spy was on American soil, a president could offer arms deals or other support to encourage cooperation. That’s not bribery.

So the key is that asking a foreign government to investigate or prosecute a rival or his family is corrupt in this context. This might be true in any corruption case against any rival (no clear and present danger. Hunter isn’t going to kill anyone). But it seems clear when the case is apparently so weak.

This is unlawful foreign solicitation/coordination. It doesn’t matter if it rises to the level of a criminal violation. It is a civil violation of campaign finance law in itself to solicit a foreign government to conduct opposition research for your campaign, especially given the record of Trump’s 2016 campaign (which I documented here as criminal by Manafort and Gates, and would at least be a civil violation by the campaign).

Key reminder: “High crimes and misdemeanors” for impeachment ARE NOT limited to felonies. The Framers purposely used the English phrase for abuse of power, not felonies. If people argue this transcript is bad but not criminal, they are missing the point and moving goalposts.

The call took place on July 25, with Trump saying AG Barr & Giuliani were in on this plot. A week before: Trump order Mulvaney to block $391M from Ukraine. 3 days after: Trump forces out the uncooperative DNI Coats for his hack in the House, Congressman Ratcliffe. Many officials are implicated.

Five final observations:
1) Some people say Trump’s Biden request came after the quid pro quo “though.” This is wrong, because Trump linked a first thing (CrowdStrike and “the server, they say Ukraine has it”) and “the other thing,” Biden, which came immediately after.
But let’s think about Trump’s CrowdStrike and “server” reference. What’s that about? That’s about the 2016 Russia hack of the Clinton server. Trump is trying to get Ukraine to produce evidence (propaganda) about the 2016 campaign to dispute the claim that Russia was behind the hacking, as part of a crazy conspiracy theory that Manafort’s enemies in Ukraine set him up. So even this effort by itself about CrowdStrike and the server is an effort manufacture campaign propaganda for 2020.
2) This bribery transcript is so damning and criminal, and yet the White House just released it without a fight. It’s hard not to wonder what must be in the IG whistleblower report, Trump’s tax returns, and Trump’s bank records…
3) If Trump, Barr, & Giuliani had to take such risks to press Ukraine to investigate, it suggests the DOJ and FBI resisted their corrupt pressure for a partisan prosecution of the Bidens. That says a ton about the weakness of Trump’s lies & the strength of our rule of law…
4) Impeach Barr. It is obvious Barr must recuse himself. It is equally obvious Barr will resist such calls… But impeaching Barr for such conduct either forces him to recuse or highlights his unethical behavior if he won’t. At least it scrutinizes his conduct.

5) Emoluments! It’s not just the felony quid pro quo… There is also an explicit and sad #Emoluments suck-up by Zelensky on p 4-5:

“The last time I traveled to the United States… I stayed at the Trump Tower.”

Courts: take note of this causal nexus for plaintiffs’ standing and corruption.

Bonus: is this what Giuliani and Trump meant when they said the Take Care clause gabe the president a duty to outsource prosecution to the Ukrainian government? 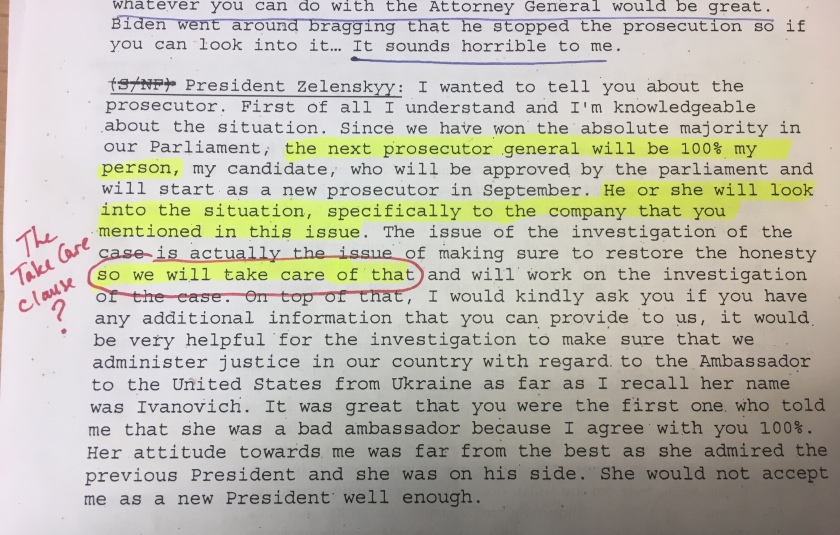 Legal historian at Fordham Law School, teaching Torts, Administrative Law, and Constitutional History. JD/PhD in History, Yale. Red Sox and Celtics fan, youth soccer coach. Author of "The People's Courts: Pursuing Judicial Independence in America" (2012) on the rise of judicial elections in America. I filed an amicus brief in the Emoluments litigation against Trump along with a great team of historians. I'm working on "The Rise of the Prosecutor Politicians," a history of prosecutors and American politics, and another project on the origins of independent agencies in America. View all posts by Jed Shugerman

One thought on “Quid Pro Quo: The Trump Transcript is a Felony, Not Just a High Crime”